Ventolin HFA is an inhalable prescription medicine designed to prevent or relieve bronchial spasms in patients aged four and older who are affected by wheezing illnesses such as asthma or COPD and acute bronchoconstriction episodes caused by too much or too intensive physical exercise. The medication is also widely prescribed to patients who suffer from chronic bronchitis or emphysema in whom breathing stress symptoms are the result of reversible obstructive airway disease. 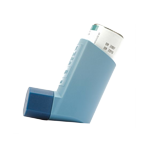 Disclaimer: Before taking any medications, over-the-counter drugs, supplements or herbs, consult a physician for a thorough evaluation. We does not endorse any medications, vitamins or herbs. A qualified physician should make a decision based on each person's medical history and current prescriptions. The medication summaries provided do not include all of the information important for patient use and should not be used as a substitute for professional medical advice.

Ventolin HFA is a quick-relief medication, which is meant to be used only when a person is having an attack, for prompt help with their bothersome or dangerous symptoms. The Rx drug usually kicks in within just 5-15 minutes of inhalation and keeps working for around 6 hours.

How does Ventolin HFA work to treat asthma?

The drug’s chief active substance is albuterol, which belongs to the beta-2 agonist pharmacological class of medications with pronounced vasodilating and muscle relaxant effect. Their powerful therapeutic action is especially evident in the person’s airways, intestines, uterus, and the vascular system, where they help facilitate the relaxation of the bronchial smooth muscle.

The drug’s form of administration through inhalation has more remedial value as contrasted with taking oral pills since it ensures a much quicker onset of action and fewer side effects. The primary absorption of this nebulized medication occurs in the respiratory tract, thus guaranteeing quick relief of asthma symptoms; the rest of the dose is swallowed and continues working from the digestive tract of the patient.

By widening the constricted air passages in the bronchi and lungs and relaxing the smooth muscle therein, the drug makes breathing easier and removes the symptoms of breathlessness, coughing, wheezing, and tightness in the chest.

How to take Ventolin HFA for treating asthma symptoms?

Ventolin HFA is a rescue inhaler so make sure you always have it on you when you go somewhere.

The usual recommended dose of this drug is two oral inhalations of 100mcg each that a person may repeat every 4-6 hours, as prescribed by his doctor individually. If Ventolin HFA is used to prevent bronchial spasms triggered by physical exercise, the medicine should be taken 15-30 minutes in advance of such exercise.

Increasing the frequency or number of puffs per intake is strictly not advised as it will probably not work better but may lead to the development of unwanted and threatening side effects. If your medicine has stopped producing the same therapeutic effect or you have noticed the worsening of your symptoms, let your doctor know about this. He may choose to make some adjustments to the dose or switch you to another drug.

What are the typical side effects that Ventolin HFA may cause?

Immediately upon inhaling the medicine, some patients might feel a little jittery; in other words, experience minor agitation, uncontrolled shakiness, elevated heart rate, and dizziness. The sensation passes quickly, usually within a few minutes of administration. However, it is best to remain seated and avoid making any sudden movements until the symptoms fully disappear. If you have to use your inhaler while driving a car, stop the vehicle before you take your medication.

Other frequent side effects from taking Ventolin HFA include headache, irritated throat, dryness of the mouth, nasal blockage, rhinorrhea, muscular pain, upset stomach, feeling sick or puking, distortion of the sense of taste, and trouble sleeping. These symptoms, while unpleasant and causing much discomfort, pose no long-term danger to your health. If they tend to linger for a longer than expected time, inform your doctor as he might want to make certain adjustments to your dosing schedule.

Some more worrying and potentially life-threatening adverse reactions of Ventolin HFA are acute pain in the chest, noticeable abnormalities in your heartbeat that do not go away after some time, continuous shaking of the arms, legs, feet, and hands. Having any of these symptoms requires you to seek urgent medical attention.

If you are new to taking albuterol-containing anti-asthmatic medications, particularly, Ventolin HFA, carefully watch for any signs of an allergic reaction when you first use the drug. These signs may include redness of the skin around the face and neck, swelling of the tongue or throat, labored respiration, watery eyes, running nose, rash. Seek emergency help if you notice any of these symptoms shortly after inhaling Ventolin HFA for the first time.

Who might have to avoid using Ventolin HFA for the treatment of asthma symptoms?

Asthma patients and people with other forms of reversible obstructive airway disease who also suffer from one of the below listed health problems should be especially careful when taking albuterol-based Ventolin HFA as their concomitant diseases may affect or be affected by the use of this drug.

Talk to your doctor about the suitability of this medication if you have any of the following medical problems:

Always let your doctor know if you are pregnant, trying to become pregnant, or are currently breastfeeding a baby. He will carefully evaluate the possible benefits and risks of your taking this medication in your condition and either authorize its use or suggest an appropriate alternative treatment option.

Certain medicinal drugs and herbal additives may interfere with the work of Ventolin HFA and change the way it operates in your body by reducing the efficiency of the medicine, delaying the evacuation time, postponing the onset of its effect, increasing the frequency and severity of side effects, etc.

Consult your doctor to make sure none of the medications you are taking or have taken very recently interacts dangerously with Ventolin HFA.

Important information and precautions associated with the use of Ventolin HFA

Do not expose your Ventolin HFA inhaler to direct sunlight or extreme frost and always store it below the temperature of 30°C.

Always prime the inhaler before applying it, if it is new or when it has been over two weeks since you used it last time.

When you are using your Ventolin HFA inhaler to relieve your asthma symptoms, do not hurry too much and try to make slow, deep intakes of breath to make sure that all of the medicine gets in. Hold the breath for 10 seconds after each inhalation and then breathe out calmly and to the full.

Сlean the actuator of your inhaler at least once every week with warm water and dry it in the air. This will ensure it doses the medicine correctly and will lower the likelihood of orifice blockage occurring. Also, by washing the actuator thoroughly and regularly, you may reduce the chances of developing viral respiratory infections, which are common in asthma sufferers who use inhaled drugs.

Ventolin HFA is a fast-acting (rescue) medicine, meaning it should be used only when patients with asthma are experiencing sudden breathing difficulty and need quick help with soothing their symptoms.

The maximum times per day you can use Ventolin HFA is four. If you notice that the need for taking this drug arises more frequently than that, discuss it with your doctor.

Ventolin HFA is not a maintenance medication and, therefore, is not suited for the ongoing treatment of asthma. If you need medication capable of providing you with long-term relief of asthmatic symptoms, talk to your physician about the available alternatives.

There are a few cheaper generic versions of Ventolin HFA presented in the market today. They all contain the same active component – albuterol sulfate – and produce therapeutic action similar to the original preparation. Their additional ingredients might differ from one generic to another, though, so always consult your doctor before you choose to buy and use a generic copy instead of the original branded Ventolin HFA.

Disclaimer: Please note that everything you see, read, or hear on this website is available for informational and educational purposes only and is not intended as medical advice or a substitute for a professional consultation given by a licensed medical practitioner. Remember that self-diagnosing a medical condition and self-prescribing any medications can be very dangerous. Only a licensed doctor can establish a proper diagnosis and assign a treatment that would be most suitable for your particular health problem. Please see your physician in person before you purchase and start using any medicinal and non-medicinal products from this or other Internet websites.